Charlie is Growing Up and Charles & Annette Do Things Too

Charlie has hit that stage where he does NOT want something on his head. Hoods really confuse him because he just doesn't understand why it isn't coming off like a hat or blanket. 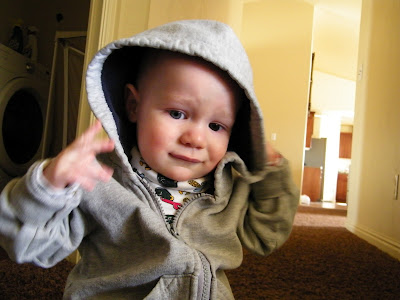 If distracted he may forget about it though. He looks like a little gangster here. 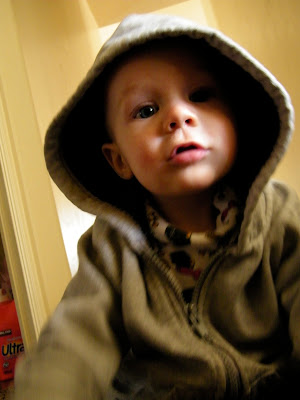 A house is being built in the lot to the left of ours and Charlie is loving the great entertainment out the kitchen window. 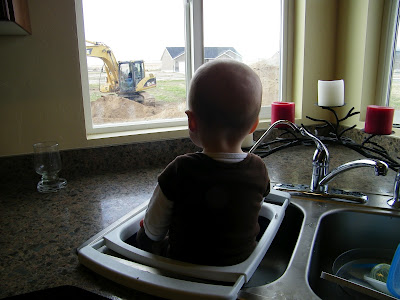 Speaking of construction, Charles has started planning our sprinkler system for our lot. I am sure glad that he is doing it. He drew up a scaled plan (that is not the word I am looking for) of our property so that he can plan everything awesomely. Our half acre looks pretty darn big when drawn out in comparison to the size of our house. It's not too shabby for being in a subdivision. He still has yet to draw in the sprinkler system and all of our plans for our yard area. We of course have grandiose plans for it all. 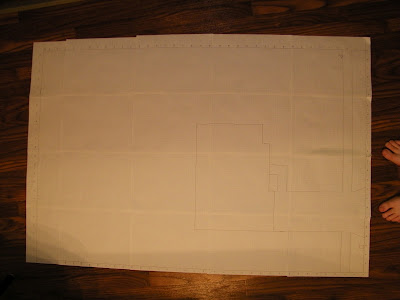 To make sprinklers fun and cute I have added a photo of Charlie giving moral support to Daddy while he digs trenches. It is pretty nice that it is warm enough to have Charlie outside where he can watch Charles work and be pretty well entertained for a while so I can get a few things done inside. 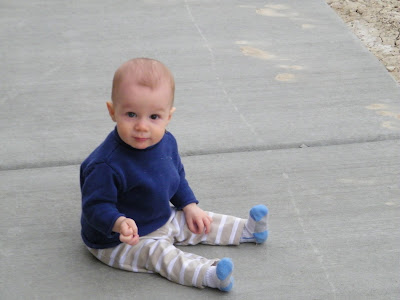 I figured that Charlie was finally old enough to have a basket for his toys. Just trying to get all the toys out can occupy him for sometime. 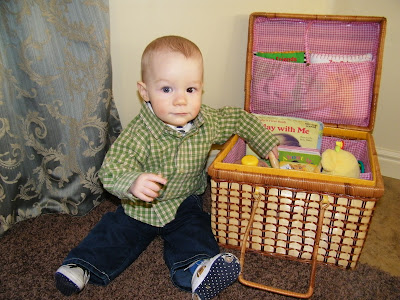 I thought that Charlie looked so darn adorable and grown up in this little outfit! 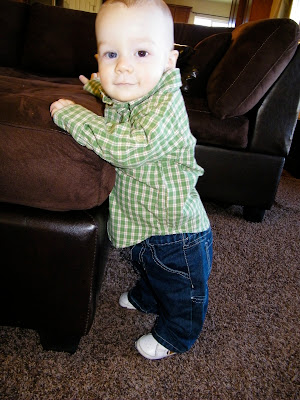 Charlie is sporting his first pair of shoes here. The best part is that we got them for free! 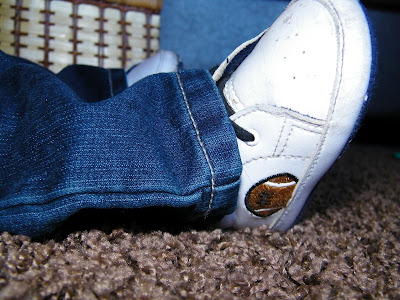 These are some of the best books. It is a plastic type of paper that he can't rip, super durable, and it is super flexible and fun to play with. The books like this that we have were written by Eloise Wilkin. I got these books for my first birthday from my Grandma Hatch. Besides the coloring that I must have added they are in perfect condition and they were published in 1960! 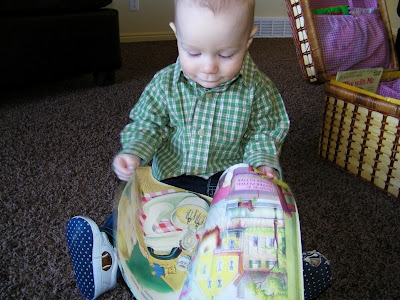 Charlie is resting his head on me after a long, hard day of taking photos. 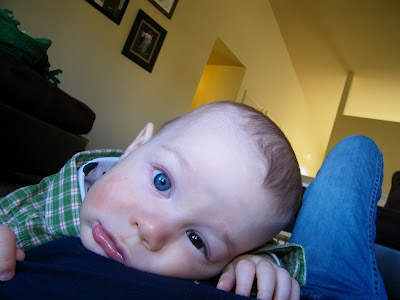 It is so fun to watch his personality come alive as he gets older. The other day he was sitting on the ground jabbering to himself and then he just started laughing at something funny he must have said. It was so funny! I just started laughing too which made him laugh even harder.
Here is another cute laughing incident. In the evening time right before bedtime Charlie LOVES being tickled. I was next to him but not really paying him much attention. He looked at me and started laughing. Not a, "Ha, ha, that was funny," laugh but a, "Ha, ha, that tickles," type of laugh. I looked at him and he gave me this look of, "I am ready to be tickled for the evening!" It was so cute. It is nice that he gives a pretty easy way to know when he is ready for bed. The trick is not to tickle him so much that he starts crying.
I have always known that Charlie has a pretty high pain tolerance, but he still surprises me. While I was at the new City Creek Mall in Salt Lake (it is AMAZING by the way!) with Charles' sisters and parents, Charles babysat Charlie at home. Charlie was playing with his toys while Charles was working on figuring out our sprinkler system in the kitchen. When Charles went to get Charlie to put him in a nap he saw that there was blood everywhere. All over Charlie's clothes and toys. Charles speculated that maybe he grabbed the vent cover and sliced his finger on the underside of the slats which are pretty sharp. When I got home Charles said, "Uh, when you get Charlie out of his nap don't be alarmed by all the blood all over him." My eyes got as big as dinner plates. How Charlie managed to cut himself and not even care is beyond me. He has nerves of steel. I can just see it now, when he is older he will come inside and I will see dry blood through his jeans on his knees. I'll inquire about it and his response will be, "Hun, blood? ... Oh that blood. Yeah I biffed it on my bike a few hours ago. It's not bad though." I'll take a closer look at his knees and see huge gashes in his skin. Live and learn, right?
Here I am at City Creek in H&M modeling their cute, but yet too short of a dress. 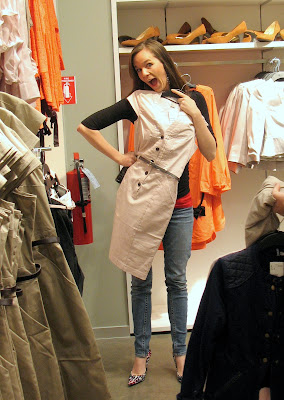 Here we are waiting for the rest of our group and food. Going clockwise we have me, Allison, Angela, and Ashley. I never get the right name to the right person when speaking, it seems, so hopefully I did a better job while typing. 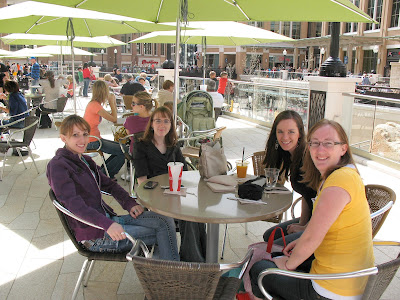 And to end on a note about Charlie: Charlie's mealtimes are pretty fabulous, of course you have those obligatory not-so-great meals, but for the most part he is doing great. Eating all of his food. Not being as picky anymore. Drinking his water from a cup pretty proficiently; he would probably do better if I was better at tilting the cup at the correct angle and OH-SO-SLOWLY adjusting it. Charlie always makes meal time fun. The other day he started turning away from me and then tilting his head back to eat his bite of food. He thought it was so tricky. He would get his bite and then turn his head the correct way and look at me with a big grin full of food. This picture isn't fabulous (he kept turning to look at the camera) but it gives you the idea. 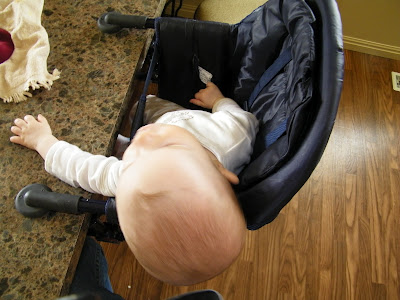