Why I Did My Triathlon

Charles wrote about the general day of the triathlon.  But now I want to tell you the back story of my triathlon.  Prepare yourself for a grand, life changing story... (sorry no major weight loss pictures)

I have never been athletic.  I have never hidden that fact.  It was just who I was.  I had never believed that I could ever be athletic.  A few months back, around the beginning of March, Charles convinced me that we should get gym memberships so that we could go on more dates (to the gym), but at a lower cost.  The main reason is because his back and core needed strengthening.  And it would also provide the kids with an opportunity to get out of the house and be with other little kids.  I consented, rather reluctantly.  After a few times of going I was rather enjoying myself.

I was fairly proud of myself for actually going and working out.  I was mostly riding the stationary bikes.  After about two weeks of going I got the crazy idea that I should do a triathlon.  I still hadn't really swam hardcore in the pool and still had never touched the treadmill.  I hated running.  I was literally scared of it.  I couldn't run at any sort of slow pace for more than half a minute.

When I told Charles about my crazy hairbrain idea he could hardly believe that his un-athletic wife had come up with something so not like herself.  I honestly don't know why I decided to do it.  I have always looked at people who do races to simply beat their prior times as ridiculous.  Why would you pay money for someone to time you when you could go out and do it by yourself and time yourself.  I think possibly one of the reasons I latched onto the idea was to give myself a goal to focus on in my life.  I wanted to break out of just being a mommy.  I wanted to find myself, a new part of myself.  Four years ago I was overdue with Charlie and since his birth my life has been directed toward the kids most of the time.

But once I latched onto the idea of the triathlon I had a greater drive and motivation.  I hopped on the treadmill with a determination to actually learn to run.  I started swimming with a determination to learn how to swim properly with my face in the water.  I googled every problem that I was encountering.  I googled how to learn to run.  How to breath while swimming.  How to kick properly.  How to change a bike tire.  I wanted to know everything.

As I was looking around for a triathlon in the area I realized that most were on Sunday and the few that were not on Sunday were in Philly, Pittsburgh, or New Jersey.  With Philly being the closest I was drawn to that, but the date of the race was sooner that I wanted.  I didn't think I would be ready in time.  And then I remembered a story about my Grandma Hatch when she was learning to play the recorder and wanted to play in church.  It motivated me to do it even if I didn't feel 100% prepared.

While on my journey of training for the triathlon Charles' cousin, Stephanie, ran the Boston Marathon and posted about her journey to accomplishing it.  She said that ten years prior she couldn't run a mile and a half.  I thought to myself, "Annette, if Stephi can go from that to a marathon, I can learn to run, too."  Every time I got on the treadmill I thought of Stephi running her marathon.

Through all of my googling I came across something that said something along the lines about just starting the race, you don't even have to finish.  If you even start the race you will have done more than not starting it.  It gave me a new perspective.  I would be fine with simply starting the race.  If my body gave out and I couldn't continue that would be fine.  I still accomplished more than I had before.  I gave my best effort.

When I crossed the finish line my body was really at the end of it's line, well, at least my legs.  My arms were still fine since the swim was cancelled.  I was so happy to have done it.  I thoroughly enjoyed having finished my triathlon, or at least 2/3rds of a triathlon as the case was.  I am still very un-athletic and have a long way to go.  But I want to continue.  I want to do it again and maybe again and again.  I want to keep my body healthy and strong.  I still don't really enjoy working out as much as a lot of people at the gym.  I don't really like getting sweaty and stinky.  But I like having a body that can run, bike, and swim.  I often think about an emergency situation.  Could I run/bike/swim if I had to save my life?  Can I go the distance to save myself?  Heavenly Father gave me this body and I need to take care of it.  I can accomplish goals and do hard things beyond my comfort zone.
Posted by Unknown at 9:47 PM 1 comment:

The trip began by me going to work in King of Prussia while the rest of the family went to see Valley Forge.  It seems the trip to Valley Forge went as well as you might expect for having three kids along and it culminated in a bee sting on Annette's foot.  She thought her triathlon was doomed, but she trudged on in the spirit of perseverance as portrayed in the history of Valley Forge.

After work we went to the hotel and took off to the triathlon to sign in and pick up Annette's packet for the next day.  We ate dinner at a Mexican restaurant with my coworker, Doug, and his girlfriend.  We got to the hotel about two hours later than we wanted to and got a rotten night's sleep! 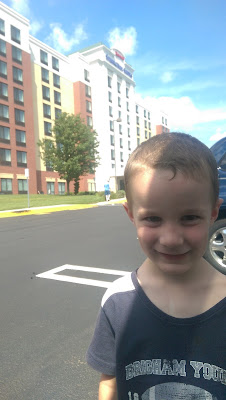 Annette thought that doing a triathlon wasn't crazy enough so she got a tattoo beforehand.  Just kidding.  Apparently, they write your number on both arms with a Sharpie AND they write the age you turn that year on one of your calves.  If you're the type of person to hide your age, a triathlon is not for you. 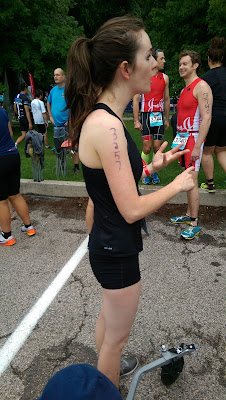 A mother's work is never done. 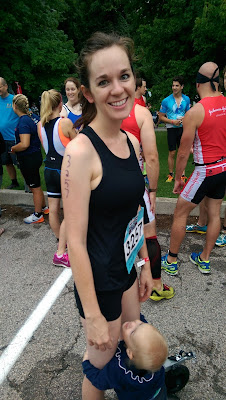 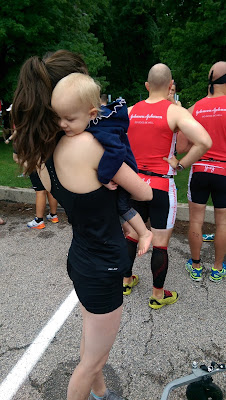 Henry was quite happy and agreeable for most of the trip.  His happiness was momentarily hindered when, seconds before his mother crossed the finish line, a very large lady who was running at a good speed (a spectator) plowed him over.  Granted, he probably staggered in front of her, but she probably should have been more careful, too.  She went flying into a crowd of people and I think got hurt worse than Henry.  I ignored it all so I could take Annette's pictures as she crossed the finish line while my coworker Doug tried to calm his wrecked nerves. 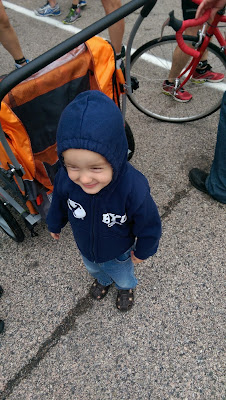 Thanks to the BYU jackets, we ran into some Alumni from New Jersey who wanted to stop and chat. We saw others with BYU garb, but didn't get to say "Hi". 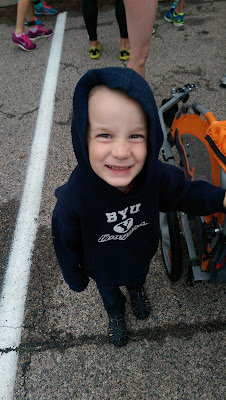 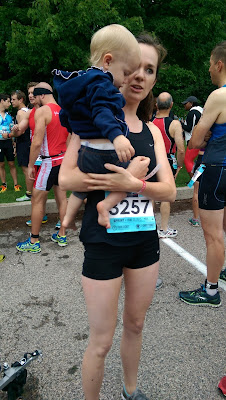 Annette's in there.  This picture is like Where's Waldo. 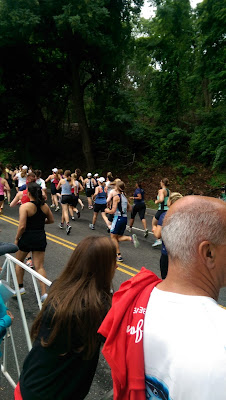 There's Annette and her running buddy, Casey, who she met while they were standing at the starting gate.  They helped encourage each other through the first run. 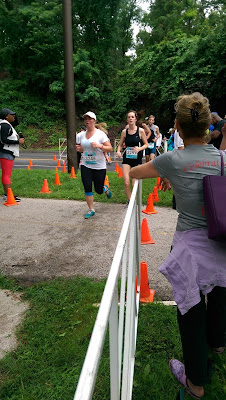 The kids mostly hung around the bike trailer while they waited... 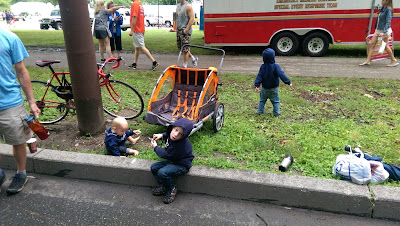 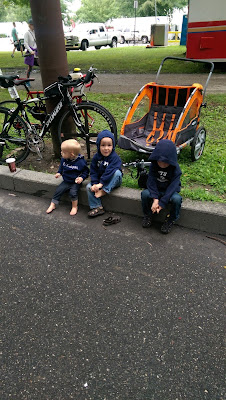 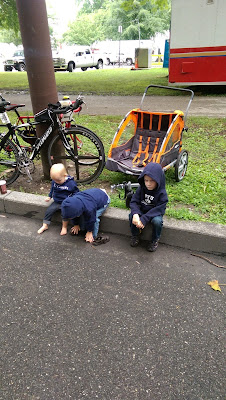 ...but they were quite a bit more patient than I think I would have been at that age.  Little did Henry know that this was where he was soon to be obliterated by someone 10x his size. 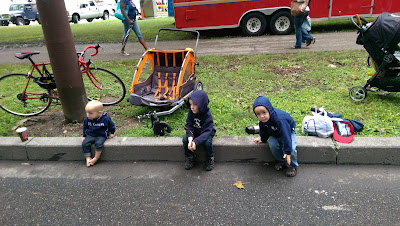 And the triumphant moment arrives! 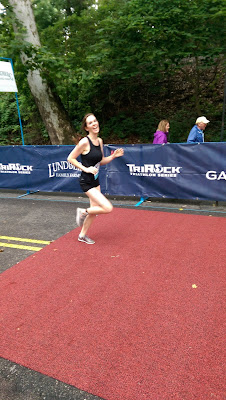 I was surprised she had energy to be almost silly at the finish line. 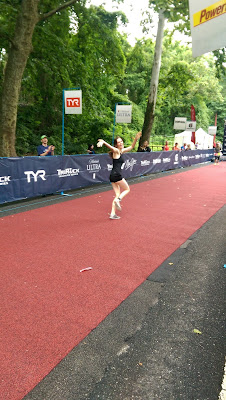 If you blow this photo up you can see her time, except you have to subtract time since she started in the third wave.  She came in 95th out of the 99 in her wave (women 29 and under). 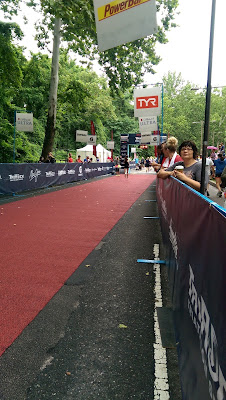 She found her new friend afterward and got a picture taken. 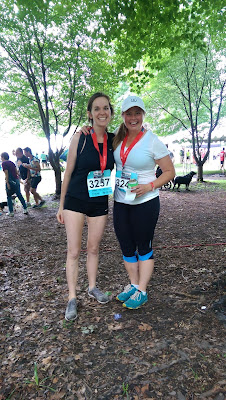 She got her time breakdown for each part of the race.  Run (1st 1.55 miles), T1 (first transition time), Bike (15.7 miles), T2 (second transition time), and Run (2nd 1.55 miles).  Total time: 1:55:36!  The swim part got cancelled due to weather/poor river conditions so they split the run up on either side of the biking so they would still have two transitions.  The running was Annette's personal best time.  Annette didn't realize until a few days before that the biking was 15.7 miles, she thought it was 15 miles, so it was the farthest she had ever biked, another personal best. 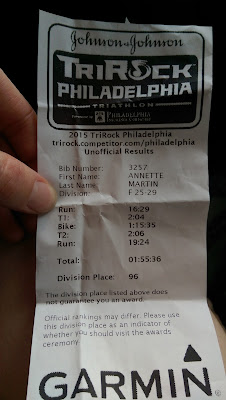 But not even Annette could be as tuckered out as these little guys.  They were as tired as if they had competed in a triathlon!  Elizabeth got to wear the finisher's medal.  I would say the only thing more miraculous than all of these events was that our gold fish didn't die while we were gone for about 30 hours. 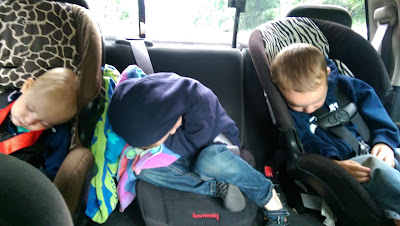 Posted by Unknown at 8:52 PM No comments:

I made a road for the boys' cars and trucks.  It was a Pinterest idea which worked great.  The parking lot area was Charlie's idea though.  I have since made more corners so it works better.  It is a bit slippery on the hard floor and Lizzy messes it up, but on carpet the road pieces don't move as much. 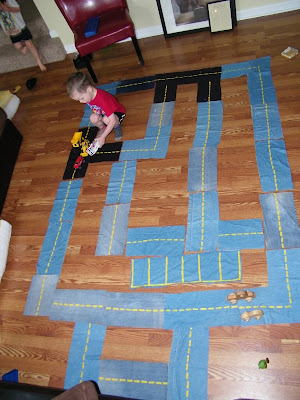 We have been enjoying the outdoors with chalk! 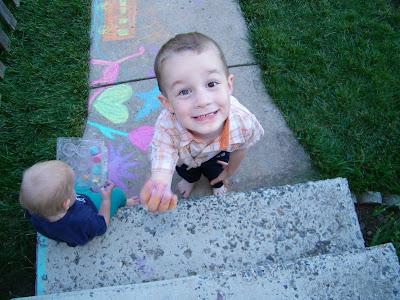 Lizzy loves to collect and recollect all of the chalk.  After a few minutes she is filthy! 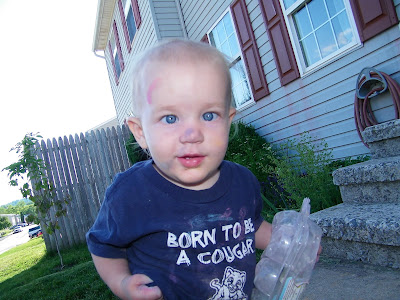 I have decided that I am going to be creative and try to draw something new for the kids every few days.  I started off with a train. 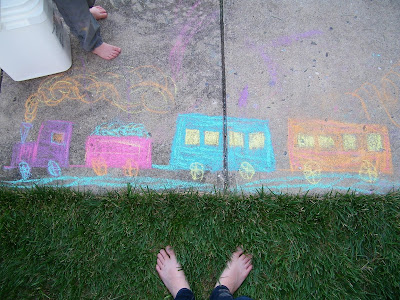 I drew this fish and part of it that is not in the photo is a river going up our steps that the fish is swimming in. 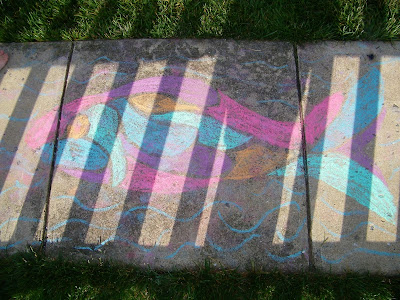 We are ripping out the two large bushes in our front yard so my herbs and other useful plants can have more space to grow.  I made this wreath with the branches of one of the bushes.  I added lavender and a ribbon to make it all pretty.  It is dying quickly and will be in the trash tomorrow, but it was fun while it lasted. 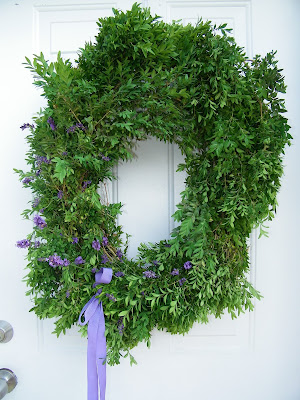 Lizzy needed no teaching about necklaces.  She loves them and has commandeered all available necklaces that I would let her have.  She often also wears my sewing measuring tape and unplugged power cords draped over her shoulders.  She has been really good at not choking herself too which is a defiant benefit.  Oh, her umbilical hernia is apparently not as large as it seems and won't need surgery unless it is not gone by age 4. 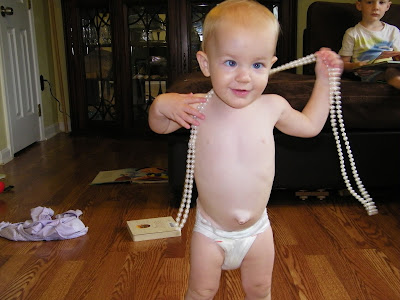