Yes, we have moved...again. And at times it feels like we make nomads look permanent. We are now at my Uncle Karl's house. He has split the house in between the top two floors and the bottom two floors. He only has one kitchen and it's on our side, but he's rigged up a kitchen-like area that works for him. He has the laundry machines on his side, so we'll probably just do our laundry at my parents' since Annette is almost always in the neighborhood. We really did get the better end of the bargain and we hope that Karl can handle his makeshift living arrangement. David Hatch (Annette's brother) is the only person who's come to visit us so far, but since our place still looks like the inside of Shrek's nose, it's probably for the best.


In other news, Annette got in her first car accident. Some overanxious driver hit the person behind her which drove the car into Annette's. They all pulled over and Annette saw that there was no real damage to our car and she bid them adieu. They probably hit our towing package which would have left a really nice mark on their car. It was dark and she was almost late for a ward dinner group so she didn't survey their damage. She was thrilled to finally be in a car wreck where (A) she was the driver and (B) in which there was little to no damage. She has now experienced what a 3-5 mph impact feels like. It's a surprising jolt!

Speaking of the Beast, it's at a new and somewhat significant mile marker. 180,000 miles! The proof is below. 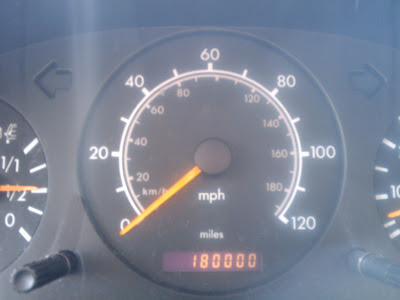 What else? We bought a Christmas tree! Annette spent a good deal of time putting it up and making it look as good as it can. It's not a super special tree, but it was a super deal and if we use it for more than two years, it's probably paid for itself. I'm sure Annette will post a picture of this at some point.

Last but not least, it's exciting that Annette only has two more semesters and she's DONE! We're both excited and anticipating celebration. Thus it is. The End.
Posted by Charles at 3:59 PM No comments:

Anytime I hear of dogs being the best pet ever, I just have to shout it from the roof tops... or from our blog.

Charles found this article and told me about it.  It is titled "Canines Improve the Lives of Diabetics: Talented dogs trained to recognize low blood sugar can help diabetics live a more fulfilling and healthy life."  It is all about these dogs that are trained to detect the low blood sugar levels of people with Type I Diabetes.  They said that the dogs can detect it quicker than some machines.  The place they are trained is called Dogs4Diabetics  I think the dogs are so special and amazing.

Here are two stories from the article:

"Kathy was over at a friend's house, and a car pulled up to the curb.  A woman came out with a black Labrador.  Kathy, 'a sucker for black labs,' started to pet the dog, but instead of wagging its tail happily, the dog just stared at her intensely.  It made a strange motion, jumping into the air and back down, and then kept staring.
"'Are you diabetic?' the dog's owner asked.  Kathy said she was and the woman told her that her blood sugar was dropping.  'My dog is trained to detect dropping blood sugar.'  Although skeptical, Kathy went inside and tested her blood sugar.  And sure enough, it was at about 40 mg/dl (Mornal is in the 8- to 100 mg/dl range.)"

"On a recent airplane ride, Odetta [the dog Kathy got for herself] grabbed with her mouth the special black cloth strap (called a 'bringsel') that hangs from around her neck, and nudged Kathy - her signal that something was off with Kathy's blood sugar.  Kathy's blood sugar was fine, but Odetta wouldn't give up.  She started to alert with more urgency, even standing up and walking in the plane aisle to get Kathy's attention.  Something was wrong, so Kathy asked the man sitting next to her if he was a diabetic, and sure enough, he was - and his blood sugar was dropping.

If I was a diabetic I would love to have a dog like this, too bad I'm not.  I guess I'll just have to get a dog anyways.
Posted by Unknown at 9:22 PM No comments:

Charles' had a great birthday party.  There were lots of people that came and it was lots fun.  If you weren't there, we wish you were.  A few people brought gifts and it was funny that most of the gifts involved food.  People sure know Charles. 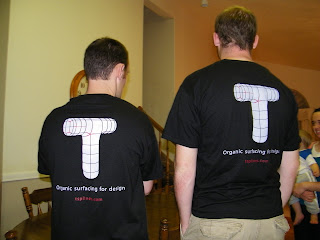 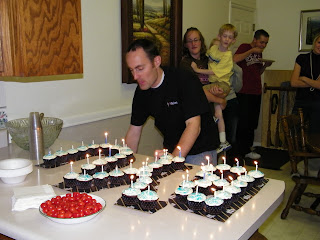 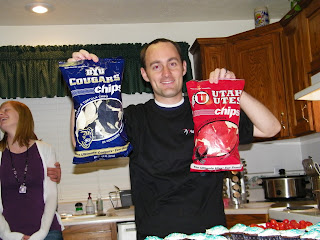 I taught Relief Society Lesson #20 on Baptism.  It went quite well I think.  I noticed that I teach similar to my mom; we must be related.  One woman said that I brought life to the Relief Society.

Charles and Angela (Charles' little sister) played a musical number in Sacrament Meeting, I Know That My Redeemer Lives.  Charles played his viola and Angela played the piano.  It was very beautiful!


Charles taught Elers Quorum on Elder Uchtdorf's "You Are My Hands" and did a wonderful job!


I am currently taking an English class at BYU and we were assigned groups to write a 20 page paper together.  Unfortunately my major (Speech Therapy) didn't correlate with anyone else', so I am in a group with two biologists and one public health person.  To pick a topic we all had in common was quite difficult, but one of the girls mentioned the idea of epidurals verse natural birthing.  Out of all the topics presented, that was the one I related to the best since I am a female and will someday have a baby.  So our group decided that we would research it out.  We have come up with lots of information and pros and cons to everything.  I have been able to talk to my sister who has done both, but if anyone else wants to share their experience and to have the chance of being quoted in a 20 page report, you can contact me and I would love to know all about it.

So I had an ingenious idea that I got from a friend and am now going to share with you.  About a year ago, my friend and I were presenting in class and as we were sitting there waiting, I saw that her slip had a thick chunk of lace at the bottom.  I asked her where she got it and she had no idea.  Since that moment, I decided that I was going to get six inches of black lace and attach it to one of my slips.  By doing this, I could then have the lace from the slip sticking out from under the dress to lengthen the dress.  After thinking about it for a year. I finally accomplished my task.  I got some lace fabric, doubled up the lace and hand-sewed it onto the the bottom.  I was nowhere brave enough to machine-sew a lace material on to a stretchy material.  The slip looks quite nice and whenever I wear it to work, I get a lot of compliments and show them what I did.  I guess you could buy a slip with thick lace on it, but it is at least $30 for it and since I already had a slip that was a had-me-down from my mom and the lace wasn't too expensive, it was by far cheaper to do it myself.


This last Monday was quite a day!  As I was driving to school, my car wasn't driving right--not too weird, just didn't feel right.  After about two blocks, I pulled over.  The Holy Ghost told me that I needed to check the tires.  I was kind of surprised because Charles just checked my tires the Friday before.  I looked at them and sure enough, my front right tire was was almost all the way flat.  I drove home and asked my mother-in-law if she could drive me to school.


On Monday as well, Charles called me during the day and told me that he lost his job.  I am not really too concerned about it.  I know that Charles will do great things!
(Charles' Commentary: I prayed that morning with more fervor than I have in a while that something would happen with my job.  Either I needed this job to turn into something great, or I needed to lose it so I could start learning and growing in another company.  I was SHOCKED that I lost it, but praying still helped cope with the shock.  It's rumored that my boss lied about me to his boss which is how he got permission to lay me off, but I hope for his sake he didn't lie and I give him every benefit of the doubt.  Everyone at Merit Medical loved me and I loved them...excepting my boss who didn't seem to love me.  I had just given the aforementioned Elders Quorum lesson in which I urged people with all the conviction I could muster that we need to love everyone regardless of how they treat us, and I guess in a way, being let go from Merit relieves me of a trial in my life and at least I can say in good conscience that I tried to love and serve him to the best of my ability.  I could talk about the lessons learned for hours, but I'll let you get on to Annette's more interesting material.)

The other day while I was at work with nothing to do, we talked about "Hoarders" a show on A&E.  I had never heard of it, but it was fascinating to hear about how these people hoard things for way too long.  They kept telling me all the crazy stories of people and how they will collect the weirdest things because of things in their past.  They said that most of the children of these people say their parents love their things more then them.  One child actually called social services because he would rather be a foster child than live in the filth.  I was quite intrigued, so I googled it and it was absolutely disgusting, but so interesting.
Posted by Unknown at 12:07 PM 2 comments: