We want to wish all of the Father's a HAPPY FATHER'S DAY!!!
I finally finish all of my classes and took all my finals.  I am happy that my math class is finally over, but very sad that my ASL 201 class is done.  But on Monday I start Anatomy and my ASL 202.

This Friday Charles and I bought a couch, as pictured below.  We got it for a cheap deal off Craig's List. 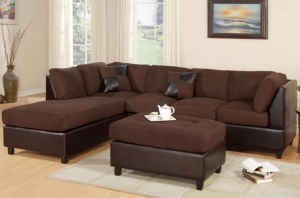 Rose and Ben Hall are now officially married for time and all eternity.  They were married in the Salt Lake Temple.  Charles and I left plenty early to be able to make it on time, but of course there was one little section of traffic that took an hour.  We were consequently late to the temple, but Charles was able to get in just as the people were filing into the room.  I unfortunately forgot to bring my temple recommend and got to wait for everything to be done.  The reason that I forgot it was because I don't like hauling my purse around and since I wasn't doing work in the temple, I obviously don't need to remember it.

After the reception we picked up my cousin Brent from the SLC airport because he will be talking a class at BYU.
Posted by Unknown at 11:22 AM 2 comments:

I forgot to mention that on Memorial Day after going to the Zoo we spent quite a bit of time in the Salt Lake Cemetery looking at graves and finding all of the prophets' graves.  It was so much fun.

Spring Semester at BYU is coming to a close for me.  Things are finishing up, it is very bitter sweet for me because I am very excited that I will be done with my math class, but very sad that my ASL 201 class will be ending.  My teacher for ASL was my absolute favorite ever and I wish that class would never end.  She always had the best stories to tell us and taught us so much about ASL.


We finally got the specialized license plates for my car.  In Russian, our cars now say "Beauty" (KPACOTA) and "Beast"(3BEP6)

Charles was very excited about the FIFA world cup and was distraught when we only tied England.

We went and saw the Orem SummerFest fireworks.  It was lots of fun and I can't wait to take photos of the ones for 4th of July.

We watched "Arsenic and Old Lace" recently.  It was still as it was when I was a kid and watched it.
Posted by Unknown at 12:02 AM No comments:

Memorial Day and the Townhouse

For Memorial Day we went to the Zoo with his family.  There were lots of people, but it was lots of fun.  It is funny how quickly little kids can look at animals.  I could have sat there and starred at some of them for a really long time.  Here are some photos for you to enjoy. 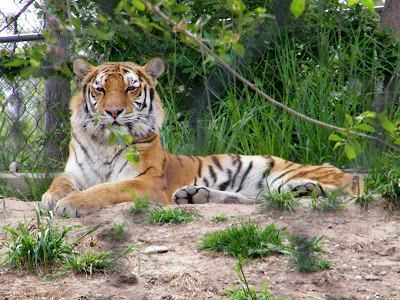 Charles and I went to the townhouse again last night to see it again.  We took some photos of the place and talked to our immediate neighbor who happened to be outside.  Here are the photos from it along with the floor plan (I do understand that the levels don't look like they match up, but they are supposed to) and numbers where each photo was taken with the direction it was taken so that you get a general idea of everything.  (If you go to the actual blog you can click on photos to make the larger) 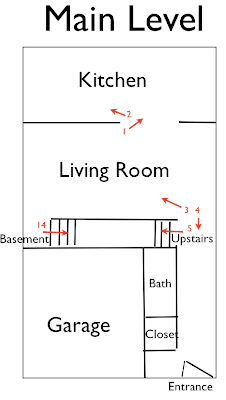 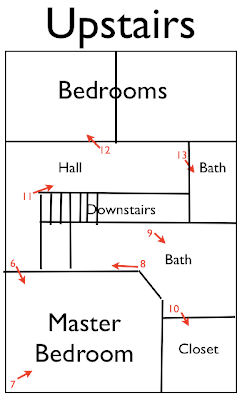 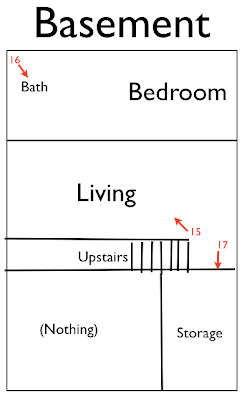 Last weekend Charles and I went to Twin Falls Idaho to visit my sister Colleen and her wonderful family.
The little girls loved playing with Charles and I.  We had such a fun time.
Here we are are at a super huge waterfall that we could stand behind. 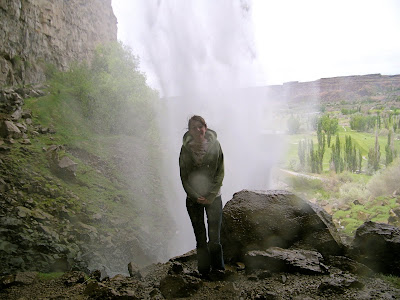 Here we all are behind the falls. 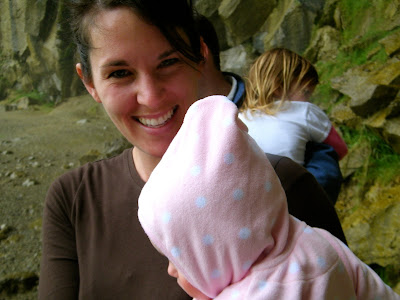 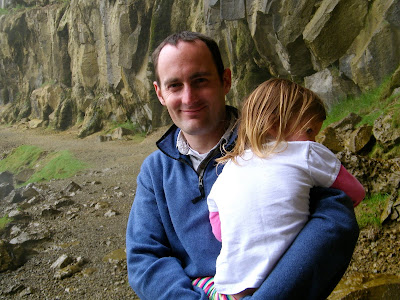 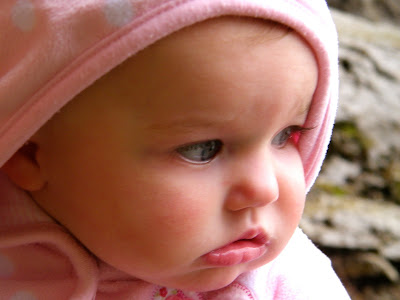 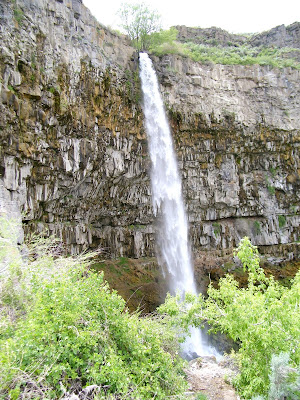 There is an elk farm area which we drove past.  It was pretty neat since I had never seen elk before.  They look like they have fuzzy horns and as if they should be pulling Santa's Sleigh. 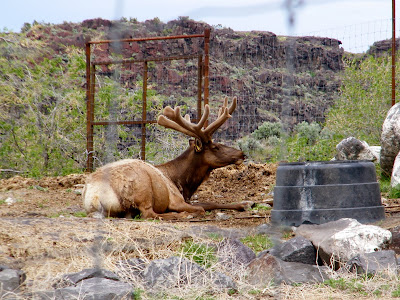 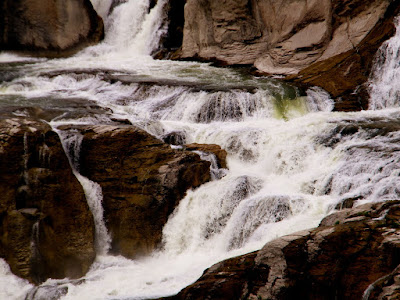 Here is the Soshone Falls, they were quite big and fun too watch.  I took a panorama picture of the area, but it still isn't stitched together, so that will be coming later. 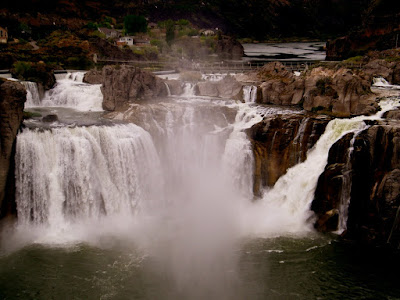 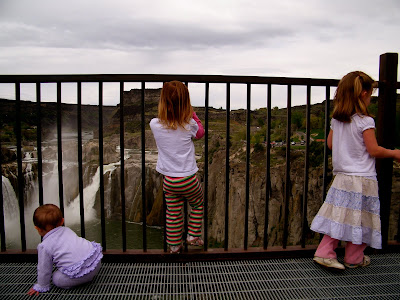 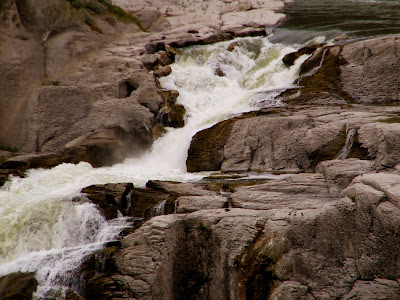 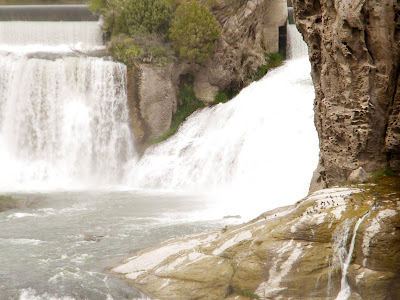 Here is stinkbug Tara.  It is so funny that she crawls like this. 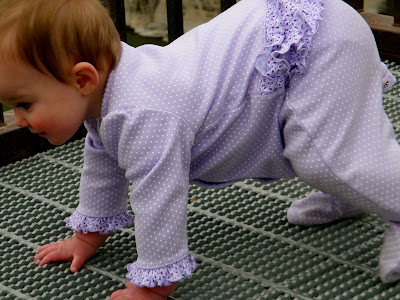 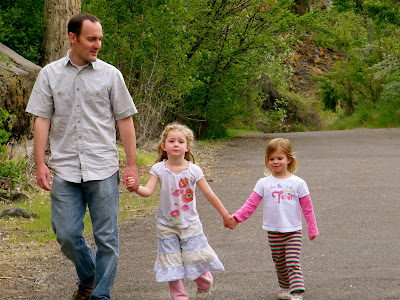 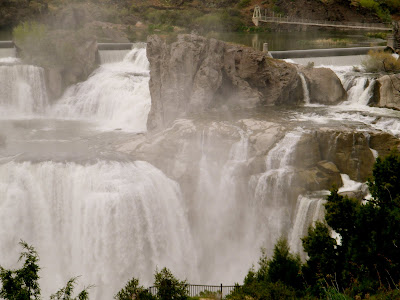 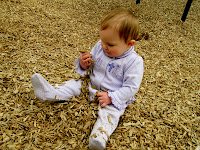 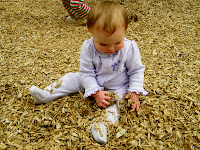 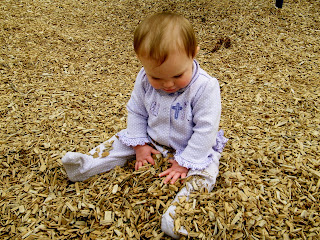 Tara really seemed to find these wood chips fascinating.  The funny thing is that as Tara was crawling Colleen noticed that she had become unsnapped and later that day Nathan found a wood chip in her outfit. 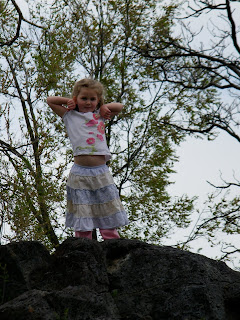 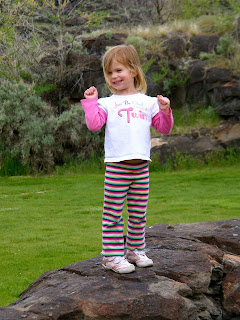 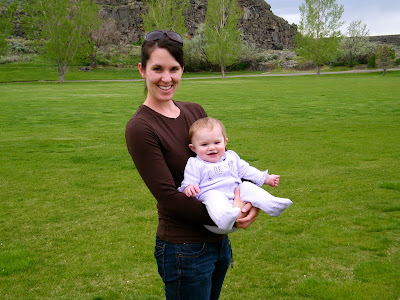 It was such a fun adventure to go to Idaho.

So although it is "Spring" in Utah, we actually got quite a bit of snow.  It was collecting on the trees with branches falling off of the trees.  It was quite crazy. 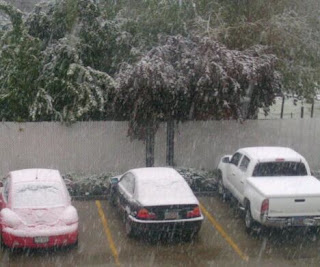 This weekend, Charles and I were in charge of the Field events at the Special Olympics which were held at BYU.  It was such a fun event and we are so thankful for the companies that sent their people to go and help out.  I am so thankful that TD Ameritrade sent so many people that were absolutely so wonderful and helpful.  I was so impressed with their people that I want to write their company a thank you note, but I tried to find where to send it and got way too confused. 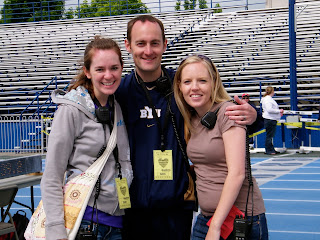 Speaking of adventures, Charles and I finally say "Up".  Everyone has said it was a great movie, but I wish I had know that it was going to have such a great moral and message to it.  I love supporting movies like that.  I loved how the main couple had such a great marriage and that life was an adventure together.
Posted by Unknown at 10:04 AM 1 comment: