This week I lay to rest my good and faithful hair blowdryer.  I got it when I was about 13 years old and it has served me well.  A few years ago we had a scare but I was able to bring it back to life by cleaning it all out.  This time resuscitation didn't work.  We had so many memories together and I will be sad to lay it to rest.  May you rest in peace my loyal hair blowdryer.
Posted by Unknown at 12:31 AM No comments:

Charlie really likes to eat whatever we are eating, he is anything but a picky eater.  For dinner I made French Bread Goolosh.   It is shlop inside the french bread all baked together.  Pretty good, but kind of messy.  As you can see Charlie was truly enjoying it. 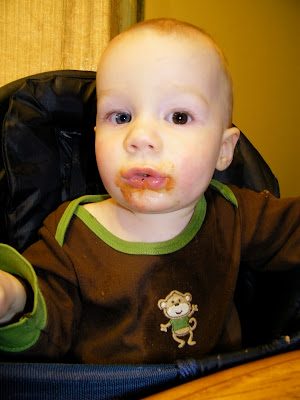 Being a mom is really fun.  The best part is watching your child grow up and learn new things.  Charlie has been pretty anti feeding himself and screams and refuses to eat.  Once he went on the bottle it took him a while before he consented to hold the bottle.  Now that he is doing that we are trying to get him to hold his cup while he drinks from it.  Here is his attempt.  It is a little different than adults, but I guess it works as long as the cup is full.
Dinner was a riot to say the least.  Here is Charlie at the end of it all.  Good thing it was Saturday and time for a bath before church the next day. 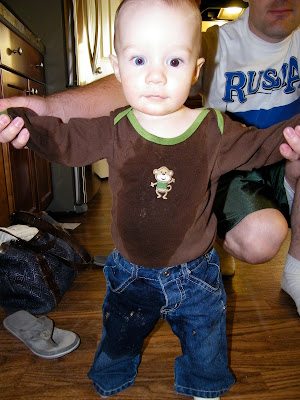 Charlie has been loving his baths, he always really has.  But now that he has learned to stand up in the tub that is the only thing that he wants to do.  He pulls himself up and then laughs and screams at how fun it is (in the picture he has a funny face, but trust me he LOVES it).  He isn't too wobbly, but when he gets really excited or tries to do something tricky he will take a fall but he immediately gets right back up to do it again.  He is not easily deterred by things.  This will be great for when he is older, but it also means that he is not deterred from doing dangerous things either. 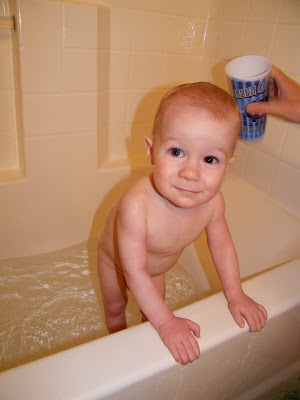 Since limes were on sale for Cinco de Mayo I bought a ton.  I have always loved limes but my love for limes has surely increased.  As I was slicing up the limes the smell brought back wonderful memories of the movie Ben-Hur.  I know what you are thinking, "Ben-Hur?  Uh... what are you thinking?"  Let me explain.  Back when I was 12 for Christmas Eve we went out to Baja Fresh (I love this place and next time I am in CA I just have to go there) where they always have a plethora of limes for your yummy Mexican food.  Mom let us open one Christmas movie early to watch and so we watched Ben-Hur.  Hence, the limes remind me of Ben-Hur.  I really wanted to watch Ben-Hur because of it.  But, I decided that I should wait until Christmas when I now watch it annually. 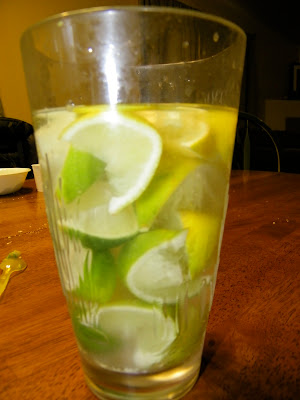 Charlie pulls himself up on everything.  This is his first time ever pulling himself up in his bed.  He was mad when I left him to get the camera, but was way happy I was taking his picture.  He usually cooperates with pictures; I think it is because he likes the flash.  The only thing is that Charlie now stands and sits in his bed instead of lying down and it is harder for him to go to sleep for naps.  One quick side story.  One time Charlie was trying to stand up, but one of his legs slipped off the mattress and out in between the bars so when I went in to get him I saw him holding on to the top wanting to let go but he just couldn't/wouldn't since he would fall on his back because his leg was through the bars. 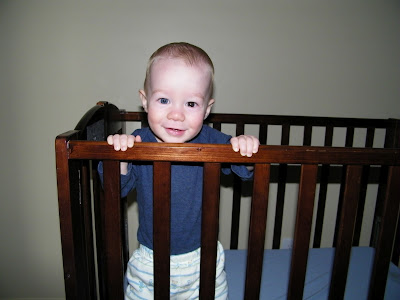 If you look closely you can see Charlie's next tooth coming in.  Is he teething with this tooth?  Nope, it doesn't even bother him.  Charlie has an unbelievable pain tolerance. 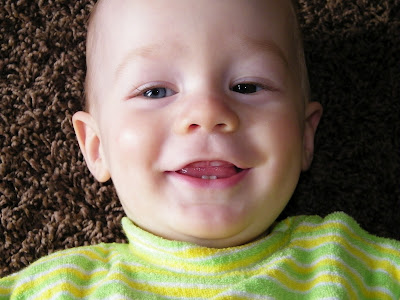 Speaking of pain tolerance, here is another great example.  Charlie bashed his eyelid on the corner of my night stand.  Cried for no more than five seconds out of surprise but the second Daddy made a silly face he was over the trauma of it all.  We thought that he would at least stop rubbing that eye when he got tired because it hurt or that he would cry from it, but nope, doesn't even bother him.  He makes me feel like a wuss since I scraped up one of my knees pretty badly last week and then got 11 mosquito bites the other day and have been murmuring about them.  I need to learn a lesson from Charlie. 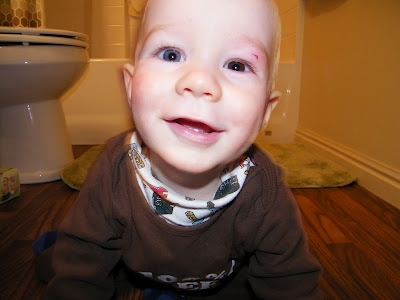 Speaking of learning from Charlie I learned a good spiritual lesson from him the other day.  Charlie had been playing by the side of our bed while we were reading in bed.  Charlie decided that he was through playing and needed a nap.  He sat there just crying waiting for us to pick him up and cuddle him.  Charles reached out his hands and said, "Come here Charlie."  Charlie is pretty good at responding and coming when we call, but Charlie was in the depths of despair and refused to move.  He was too caught up in his own pity to realize that Charles was trying to help him if he would just crawl a foot or two.  As I watched this scene unfold I thought about how in the scriptures that the Lord's hand is always stretched out to us, we just need to move a foot or two to take hold and he will help us.  But at times we are too caught up in self pity to even see that the Lord is there to help us.  As I watch Charlie I have been able to see that the relationship between a baby and his parents is very similar to that of humans and God.  I am trying to learn from Charlie about the childish things that I do so that I can be better.

On a slightly less spiritual note, Charlie got a hold of my scriptures and took out some of 1st Samuel.    Poor Samuel will never be the same after I put him back in.  I am sure one day Charlie will enjoy the scriptures for more than just ripping up.  The funny, or not so funny thing is that I heard a Charlie playing with something that I couldn't really identify.  I ignored the sound.  It continued.  I eventually looked over and right then he ripped out a bit of Samuel.

Charles and I heard about a little trip that his parents, Jan and Tom, and his little sister, Angela were taking to Rexburg, Idaho to visit Jan's brother Steve and his family for their daughter, Clara's baptism.  We really wanted to tag along since it sounded like such fun.  In the end though only Charlie and I went.  Charles had to stay home to work on his MBA.  This last week was his last and final week of his entire MBA which meant he was incredibly busy.  In retrospect it probably was a very good thing for Charlie and I to leave for Friday and most of Saturday so that Charles could have peace and quiet.  He said that if we hadn't he probably would have gotten a ton less done.

So off Charlie and I went with the Martins to Idaho.  Charlie was a little sick when we left and things got a bit worse: not too bad though.  For being sick Charlie was a pretty good little kid and was quite social with everyone.  Charlie especially loved listening to all of the beautiful music that was played.  He thoroughly enjoys music in a way that I don't understand.  He can sit so still and pay attention so well if music is being played.  Or if he is tired at all he goes straight to sleep.  He is definitely much more musical than I am.

As of today, Sunday, the 13th of May 2012, Charles is FINALLY FINISHED with his MBA!!!!!  Yea, I can talk to him for as long as I want without feeling guilty that I am distracting him from his school work. I know that he is amazingly excited to finally be able to do whatever he wants when he isn't at work.

Here are two pictures of Charlie on our trip.  I'll have more to share once some other people who had cameras and took pictures for me email them to me, hint hint, nudge nudge :) 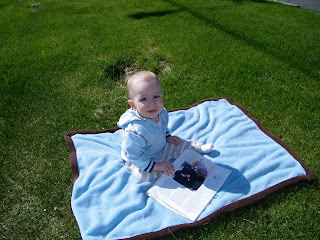 We stopped for lunch on our way to Idaho in Pocatello. 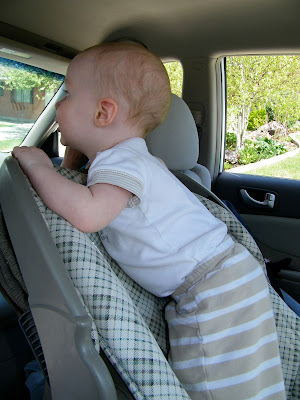 This is Charlie's way to wait in the car.
Posted by Unknown at 12:11 AM No comments: