Today we were able to get a good video of Charlie doing a hilarious belly laugh.  It is so funny!

Another cute thing that Charlie does is shake his head at you.  If you do it back, he will shake his head again.  That is how Charlie has "conversations" with people.  He loves it and thinks that it is great fun.

Charlie has always HATED bottles and anything of the sort.  Well, Charlie was a bit sick and was taking an antibiotic which was really yummy and so he learned to take it from a syringe.  So the other day I thought I would be tricky and give him water in a syringe and he took it.  Yea!  I felt so tricky.  Tonight I was giving him some water from the syringe to wash down his food.  I kept refilling it from a cup and after a while I thought, "I wonder if now that he likes water and has seen it come from the cup into the syringe if he would take it from the cup?"  He has always flatly refused a cup before, even earlier today, but I tried it to let him drink from a cup and he loved it!  I am so impressed with him.  Little moments like this when I can see him learning and putting two and two together make me so happy and make parenting all worth it!  This is a prior picture of him pushing back when Charles was trying to help him drink from a cup.  It was NOT bath water in the cup! 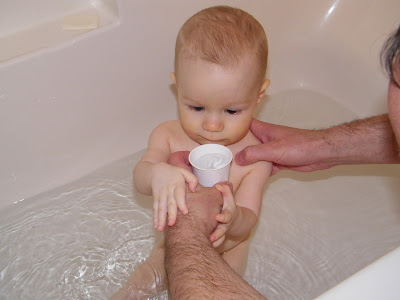 Since we are talking about Charlie's accomplishments, let's move on over to the topic of crawling.  No, Charlie is not crawling yet (I am TOTALLY fine with this since I don't have to worry about him being mobile yet, mostly since we have stairs) but he will be soon.  It is so fun to watch him struggle for something.  He REALLY wants it but is just barely too far away.  He will eventually get there though after a while.  One thing that he has learned is scooting while sitting.  When on a hard, smooth surface he puts his hands down in front of him and will push himself backwards.  He hasn't gotten the hang of going forward, but he can pivot well.  Also, as of today, he tried to pull himself up to stand.  He almost did it but then we decided we shouldn't let him try any more since we figured he would probably let go and clunk his head and we didn't want a screaming baby in the middle of church.  Maybe later. 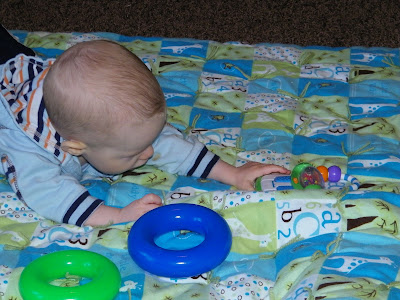 Charlie has become a bit better at eating now that we know what foods he likes.  All puree baby foods are out.  No more of that.  He wants REAL food.  Cheese chunks, cheerios, pasta, mashed potatoes, graham crackers, oranges, and stuff like that.  The doctor told us to try to fatten him up since he is SUPER small (about 3rd percentile) and keeps dropping percentiles.  So we get to add butter to everything.  I thought about dipping his cheerios in butter when feeding them to him :)

Well I think that is all the most recent cuteness of Charlie.
Posted by Unknown at 12:25 AM

HI Annette! This is Geneen, Doug Jacobson's wife who was Charles good friend at the MAD Lib. (long intro, sorry!) I had the same problem fattening Michael up, and some things that worked well for me was a banana pureed with an avocado to make a thick smoothie. Sometimes I would also add baby formula to give it an extra punch. I would also feed him Greek Yogurt, like the real stuff, not Dannon. There is a brand called Zoi that i loved because it was like 200 calories for 1/2 cup! It's awesome. You can get it for sure at Winco. Anyway, good luck fattening him up, and I hope these suggestions help!