Finals finally culminated this semester of school. They were hard and unwanted, but I some how made it. To reward myself I checked 11 books out from the library. Two were John Grisham books and the other nine were the Little House on the Prairie series which I have begun to read aloud to Charles since he has never had the blessed opportunity to read them before. We also started reading "Our Search for Happiness" for an Sabbath day reading. 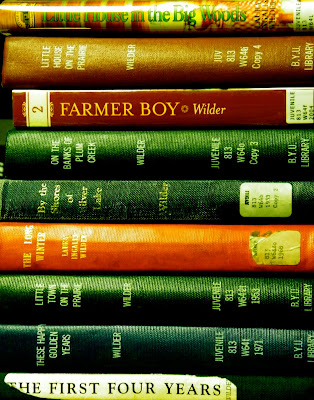 We really don't like shopping at Smiths because they not only do NOT have the best prices in town but they make you tote around a silly card to get discounts that everyone should get anyway. The only reason we went to Smiths was because they have a self-checkout that takes change--all change, even pennies. So everything we bought was Kroeger brand (the cheapest brand) and we brought almost all of our change. We stood there in line and put handfuls of change in at a time. It took forever. Lines started forming behind us. We ended up paying $13 of the $19 in change. That was fun in a wierd/different sort of way. 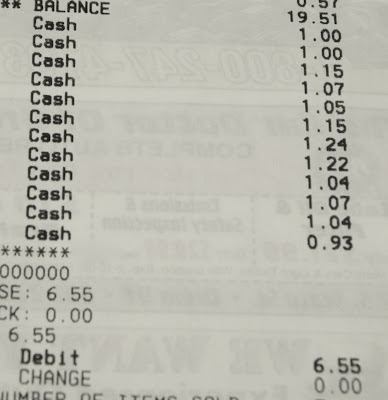 This was the first year that I have ever seen a Christmas program that ended early. It wasn't just a little bit early, but 25 minutes early. There were four songs and speaking parts. Charles was in the choir. He did a spoke as the donkey and did a splendid job.


During the choir, the little girl that sits in front of us and is in nursery, turned around and asked where my daddy was. It took me a second to understand that she was referring to Charles. I told her he was up in the choir singing. She thought that was neat.


During nursery this Sunday, I was teasing this same little girl by having the toy she wanted and keeping it away from her. She was quite smart and grabbed at my shoulder and slid down to my hand. She grabbed the toy and backed away while saying, "Neener neener, you can't get me!" It was hilarious.


Also during nursery we had a child begin to strip during singing time and say "Poopo." We pulled up his pants and I was elected to find his mom. Apparently they are in the middle of potty training.
Posted by Unknown at 11:07 AM 1 comment:

This week we:
Cleaned our carpets (with a carpet extractor)
Washed dishes
Tried to sell our BMW to a scam artist
Washed dishes
Cancelled our flights to Dallas (and got an extra $300 of flying credit!)
Reposted our car for sale
Washed dishes
Learned more about ASU's MBA program
Washed dishes
Made a scrumptious pizza
Studied guts out for finals
Washed dishes
Started a political corruption index/blacklist
Made the fanciest snowflake ever created
Oh, and we also washed some dishes


Annette took some pictures of our gustatorial adventures this week. The first is the pizza. It's our first time attempting a pizza and without any recipes. It was possibly the best pizza I've ever had in my life. It had a thick stuffed crust with mozzarella cheese. We had a homemade sauce with all sorts of spices and then, we put our favorites toppings--nothing but meat. We had bacon, ham and pepperoni. We hate it when you buy a frozen pizza and there's three pepperonis so we put on so many pepperonis that you couldn't see the pizza. Annette's picture is below. 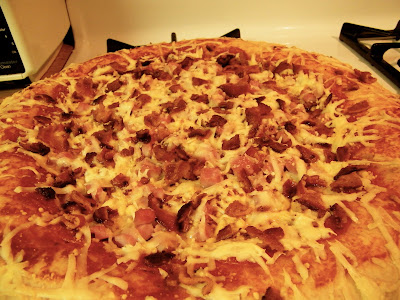 One of these nights when Annette woke up and studied from 2 A.M. to 5 A.M., she found an email asking us to bring a dessert to a ward Christmas party. We thought we would make a family favorite from my Grandma Wanda. But our interest was piqued when we wondered if we could make it more Christmasy. We colored the marshmallows and the Rice Krispies and then we dipped them in chocolate. The result was pure and undefiled glory pictured below. 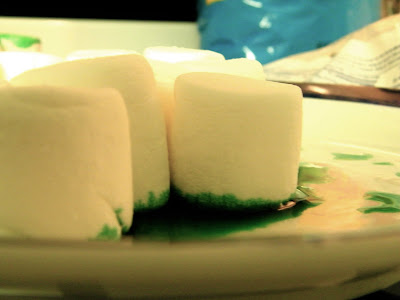 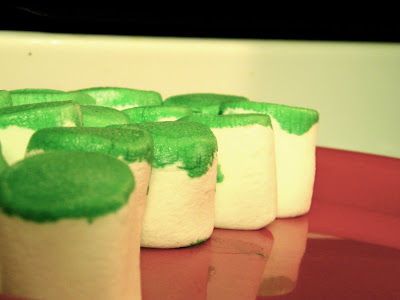 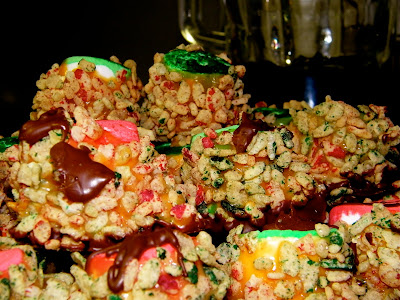 As I was consuming an Oreo recently, I found one that had been put together upside down. It's the first one I've ever seen like that. I wonder if it was a special package--one in a million--one in which we were supposed to win a trip to Cabo but since I didn't call it in we lost out. 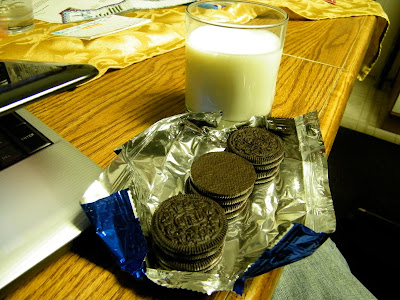 Annette was meandering through campus when she stumbled upon a cool snowflake in the Wilkinson Center. She wanted to attempt one herself since it was cooler than the ones she made previously. Then, as is typical of her continuous improvement mindset, she took it to the next level and low and behold we now have the mother of all snowflakes. 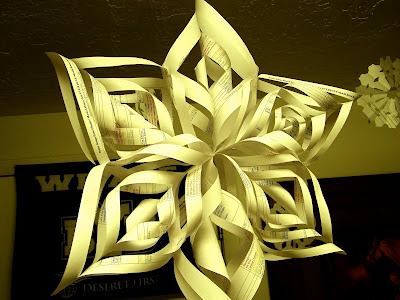 Also, Annette wants to post her pictures of our car now that it's cleaned up. If any of you are looking for a Bimmer, we'll sell it to you only if you're local and and for a mere $104,512,674. 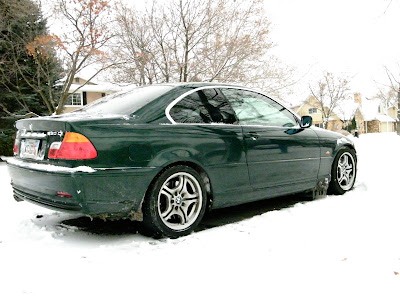 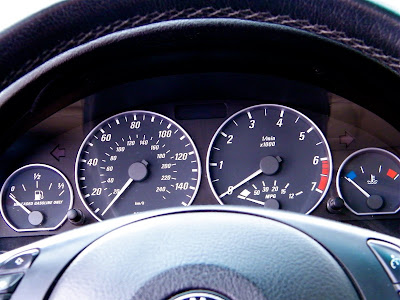 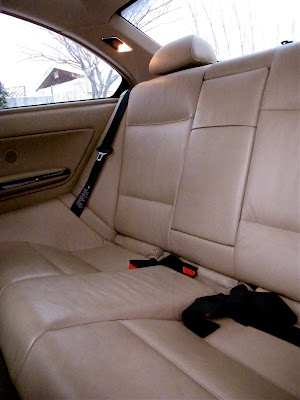 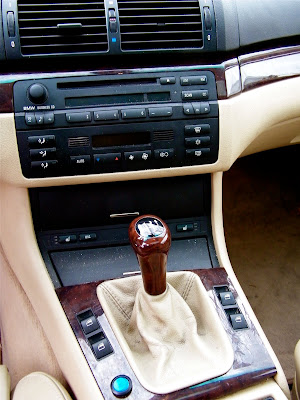 It snowed today in Orem. Normally I find snow pleasant, but because of the BMW I curse snow back to the purgatory from whence it came.
Charles' Big Accomplishment: I made a bed foundation of sorts. A few weeks ago we put our king size bed up on cinder blocks and a $12 frame from Deseret Industries. We put some old nasty eclectic boards on the frame because we were too cheap to buy box springs. Please, tell me what the point of box springs are and convince me that they're worth anything and I'll give you $100. The problem with our boards was that our bed was sagging in the middle and it was KILLING my back. Annette has a back of steel so she wasn't bothered. So I spent $35 and built an intricate system of boards that are not only insanely sturdy, but they pyramid up towards the center. WOW. You should see our bed now. I've slept like a baby. It was fun to vacuum up a ton of sawdust.
Speaking of sleeping, there are nights when Annette wants to go to bed at midnight and nights she wants to go to bed at 6 and every hour in between. It's so interesting. She just goes to bed when she wants to--no looking at clocks or anything! I'm cool with that. It's been fun.
We went to an ASL session at the Provo Temple. It was great! I think I got as much out of the ASL as Annette simply because Annette was sitting clear in the back and had a hard time seeing the TV. But it was fun for both of us. I'm not sure if I've ever stated how amazing Annette is at learning ASL. I've rarely seen aptitude for anything like this. I'm glad the Spirit directed us in this matter. She's going to really bless people with that talent.
Annette makes this thing she calls Green Drink. It tastes quite good for being so healthy and for looking like the algae that collects around irrigation drainages. It's made by pouring some pineapple juice into a blender and then cramming a fat wad of spinach in there and blending it up. That's it. Somehow it works. We've made it several times and I imagine Annette will want to put it in our baby's bottles some day.
I have new schooling ambitions I think. I'm still working on the details and I'm still looking for a job, but I really felt the Spirit strongly when thinking about ASU. It turns out that not only is ASU's MBA comparable to BYU's in quality, but you can do 100% of it online. That way I can do an MBA from a top notch school and do it here in Utah while Annette finishes BYU. Of course it will cost as much as financing a trip to Mars, but hey, we can do it. What's $50,000? It's only the scariest amount of debt I've ever considered in my life.
Finals are coming for Annette. She's done well to study even with me home. It's hard to concentrate when all we want to do is talk 24/7. We're always raising the question in our minds, "Should I talk and laugh and goof off with the Spouse o' My Dreams or should I beat my head against books/whateverCharlesdoesallday?" It's a tough choice.
For a good time, click http://vimeo.com/7912759 (hint: it's got a missed tackle)
We organized our office...mostly. It's coming along but it's sure is tedious.
We watched all of the Harry Potter movies again because it's been so long since I saw the first ones that I can't tell the difference between Harry Potter, Lord of the Rings, Chronicles of Narnia, Star Wars, and all the Hannah Montana movies. They all have monsters in them.
Our sink got clogged. I think it was a mixture of me putting potato peels down it and Annette putting a lemon down it all in the same hour or two. We tried for days to get it unclogged and finally we just hired a plumber. You should have seen the disgusting pile of garbage that came out when we were trying to unclog it ourselves. We suppose that it's sludge that's been rotting in the pipes since the place was built over a thousand years ago.
It's looks like we might be having success at selling our car when we put it up for $1,500 less than blue book. We're hoping to find a killer deal ourselves in the switch and we might not have a car for a while if we sell it too quickly.
Posted by Unknown at 2:06 PM No comments: